The society & culture based upon Islamic principles is not the society of ascetics and hermits. Adornments, recreation and fine arts within limits of morality and decency are also for enjoyment of believers. Ethics and human rights are accorded high priority. Many such aspects projected as ‘Dilemma’ are nothing but ‘Delusions’. Allah says:

“Say: Who hath forbidden the adornment of God [زينة ] which He has brought forth for His devotees, and the good things of His providing? Say: "All these things are for the enjoyment of the believers in the life of this world though shared by others; but these shall be exclusively theirs on the Day of Resurrection. Thus do We make Our revelations clear for those who understand. Say: The things that my Lord hath indeed forbidden are: shameful deeds whether open or secret; sins and trespasses against truth or reason; assigning of partners to God for which he hath given no authority; and saying things about God of which you have no knowledge.”(Qur’an;7:32-33). 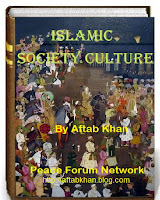 A  group of human beings broadly distinguished from other groups by mutual interests, participation in characteristic relationships, shared institutions, and a common culture,  is know to form a society. Broadly the society encompasses the totality of social relationships among human beings. The most common feature of human behaviour is its dealing with questions such as: How should we live? Is it justified to kill some one who disagrees with your beliefs? Can we justify living in opulence while elsewhere in the world people are starving? Is it right to be dishonest in a good cause? What are our obligations to the other creatures with whom we share this planet and to the generations of humans who will come after us? The answers may be found through considering the fundamental issues for practical decision making, and the major concerns include the nature of ultimate value and the standards by which human actions can be judged right or wrong. Hence the discipline dealing with: what is good and bad; moral duties, obligations, a set of moral principles or values, the principles of conduct governing an individual or a group is termed as   ‘Ethic’, emphasised by most religions, especially in Islam.
While human work can not be perfect, the divine guidance, holding rational appeal to the human,  is the only reliable source of ethics in the absolute sense of this word, which, in its turn, implies that the Last Testament, Qur'an is the ultimate source of all God-willed ethical and moral values, and thus an unchanging criterion of good and evil. (Qur’an;16:90, 98-105). Islam is not a racial faith, it believes in equality of human race, the only criteria of superiority of one over other is righteousness: (Qur’an;49:13). The motive force in Islamic ethics is the notion; "enjoin the good and forbid the evil" (Qur’an;9:112, , 3:104) in all spheres of life (Qur’an;3:110).  The Qur'an defines and sets the standards of social and moral values for Muslims at many places. Islam teaches nobler ethics for individuals and nations. A fine code of individual and social ethics, a ladder of spiritual development, open to all, the virtues of the true servants of God mentioned in Qur’an;25:63-75. The sacred duty of fulfilling all obligations of every kind, to Muslims and non Muslims, in public as well as private life, is a cardinal feature of Muslim ethics. Islam covers all aspects encompassing social, moral, public, business, trade and international relations preserved in Qur’an and Sunnah of the Prophet (pbuh). Family life and relations with other humans has an important position in the Islamic society; Islam strictly forbids adultery, homosexuality and other immoral acts. The equality and dignity of humanity was restored through a gradual process.
Islam emphasises moderation and balance in every sphere. The society based upon Islamic principles is not the society of ascetics and hermits, adornments of God, [زينة] recreation and enjoyment within limits of morality and decency are permissible. Ethics and human rights are accorded high priority. Many such aspects are projected as ‘Dilemma’ are nothing but ‘Delusion’.

It is a contentious term. Muslims live in many different countries and communities, and it can be difficult to isolate points of cultural unity among Muslims, besides their adherence to the religion of Islam. Anthropologists and historians nevertheless study Islam as an aspect of, and influence on, culture in the regions where the religion is predominant. Islamic culture is a term primarily used in secular academia to describe the cultural practices common to historically Islamic peoples. As the religion of Islam originated in 7th century , the early forms of Muslim culture were predominantly Arab. With the rapid expansion of the Islamic empires, Muslim culture has influenced and assimilated much from the Persian, Bangladeshi, Turkic, Pakistani, Mongol, Chinese, Indian, Malay, Somali, Berber, Egyptian, Indonesian, Filipino, Greek-Roman Byzantine, Spanish, Sicilian, Balkanic and Western cultures. Hence some of the cultural practices adopted by local Muslims like circumcision of females in some Arab & African countries, honour killing for marriage by choice, denying inheritance to women etc cannot be termed as Islamic culture but they are local in nature. Any cultural practice with the broad parameters of Islam are acceptable others rejected.

What Islam expects from the Muslims

·   To inhere in their best civilisation and matchless culture in a manner that they surpass all the civilised nations of the world. They should be the most prosperous of all as far as the different branches of knowledge are concerned. Invite the humanity towards Islam, by conveying the message with wisdom, peacefully, in a logical and convincing way. They should argue with them in ways that are best and most gracious.
·   Not to kill the innocent people of any faith (including own self, through suicide) except by law, they don’t have to create mischief on earth by creating anarchy or disturbing the peaceful coexistence. Warfare against injustice and oppression and self defence is permissible, to be declared by the Islamic State but the rules lay down for its conduct by Shari’a (Islamic Law) be strictly adhered to. Those who surrender or do not fight or remain neutral are not to be disturbed. The prisoners are to protected and provided peace and security.
·   To use the right of retaliation to any injustice or oppression with equality, not exceeding the limits forgiveness and patience is however preferable.
·   To fulfill all bilateral and international accords for peace and stability of humanity. To treat all members of society with equality fairness and justice.
·   Non Muslims in the Islamic society enjoy complete protections and freedom to practice their faith. The places of worship of other religions are to be protected.
·   Islam does not demand form a Muslim to give up the world altogether.
·   Nor does it require one to make the mosque a permanent abode, never to leave it. Islam also does not insist that one should live in a cave and spend his whole life there Not at all

The Political Philosophy of Islam:

In Islam the Sovereignty belongs to Allah, the power is exercised by the ruler, elected or chosen by Muslims through consultation (Shura) as representative (Khalifah) through Shari’a [Islamic law]. The Islamic political and social philosophy is based on the belief that all spheres of life, spiritual, social, political, and economic form an indivisible unity that must be thoroughly imbued with Islamic justice, ethics and values. This ideal forms such concepts as "Islamic law" and the "Islamic state" and accounts for Islam's strong emphasis on social life and social duties. Even the cardinal religious duties prescribed in the five pillars of Islam have clear social implications therefore; religious authorities have had considerable political influence in the Muslim societies. Because the mission of the community is to "enjoin good and forbid evil" so that "there is no mischief and corruption" on earth. The Islamic system of government is based on consultation (Shura), equal justice, freedom of expression, and serving the interest of the community. A government that does not serve and protect the interests of the community is not Islamic even if it professes to believe in Islam and its system and values. [For details refer to book ‘Khilafat: Redundant or Relevant?’ http://wp.me/PCgrB-lS]

The Cardinal Principle of Peaceful Coexistence:

Today we are living in a Global Village; the humanity has to learn to live in peace as good neighbours by tolerating the divergent views of members of other Faiths. The Bible and Qur’an are unanimous:“.. Thou shall love thy neighbour as thyselfs..”.[Matthew 22:39-40, similarly Leviticus ],“..be good to your parents, kinfolks, orphans, the helpless, near and far neighbours who keep company with you..” [Qur’an;]. Prophet Muhammad (peace be upon him) mentioned that; "The Angel Gabriel has reminded me so often of the rights of a neighbour until I began to think that a neighbor may have a claim to inheritance."[Sunnah Abu Dawood.2446]. “Prophet said: You like for the people what you like for yourself, and you dislike for them what you dislike for yourself.”[Al-Tirmidhi Hadith,11, 1334]. Islam brought revolutionary changes to restore human dignity, some mentioned here.